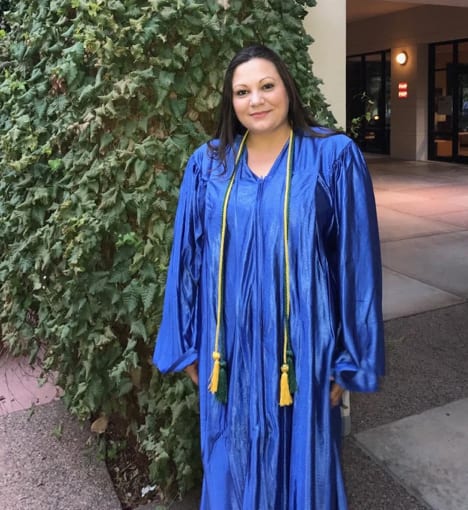 In 2015, Jamie M. found herself living in her car with her three children. Though she worked fulltime at a small funeral home outside of Phoenix, AZ, she was earning minimum wage and receiving no benefits. Jamie had grown-up in poverty, and she was determined to make a better life for herself and her children. Through her 20s and into her 30s, obstacles and adversity seemed to catch Jamie at every turn. By the time she was single and living in her car, she had started to lose hope, wondering with increasing desperation whether she would ever lift her family out of poverty. Then she was referred to Live and Learn.

Hours after she had her first meeting with Live and Learn staff, Jamie wrote this poem.

It bloomed in my chest
and poured from my eyes like a
liquid offering.

Hope sprung up
like a seed
watered by
Purpose.

A plan in action
A helping hand.

This new beginning signals an end
Finally, finally an end
The sleepless nights of worry are ending
And for the first time in ages
I can breathe
I can see a future!

This new beginning is my ending
The end of the brutal cycle of homelessness
My children will be secure! They will rest easy!

The end of standing in bread lines after a long night’s work
The end of the shame that carries, that intense burden is ending!

Opportunity came
Like God does, I imagine
Like the first light in a thousand years of night
An opportunity
A chance
A mighty encouragement

From this ending, a new beginning
A new way
A new path, and now

Now I will run!

I will run this path
Into my future
My good, good future.

With Live and Learn’s assistance, Jamie was accepted to PIMA Medical Institute and began taking classes. She was still working full-time at the funeral home and a single-parent to her three children, but her hard work paid off. In Summer 2016, Jamie graduated as a certified medical assistant, with a job already secured. She is now earning more than she ever has in her life, getting benefits for the first time, and, most importantly, she says, “Live and Learn has helped me secure a better life for my children.”