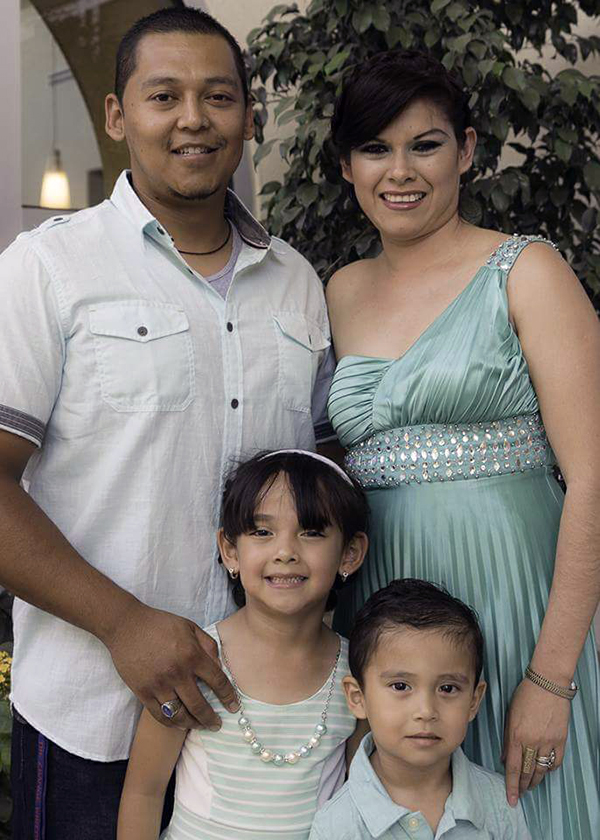 Erika is a Dreamer: she immigrated to AZ from Mexico with her family when she was fifteen years old and lives in Phoenix under Deferred Action for Childhood Arrivals (DACA). DACA allows Erika to stay in the country without fear of deportation, but it bars her from many opportunities enjoyed by citizens, including financial aid for school. Despite her limited legal status, Erika is a hard-working mother who, as a Live and Learn client, is determined to make a better life for herself and her children.

When Erika’s family first immigrated to Arizona, they shared a tiny apartment with another family. Erika spoke no English and carried a Spanish-English dictionary with her to high school every day. “High school was really tough,” she recalls. “I worked so hard to learn English, and by Junior year I took harder classes. By Senior year, I was taking all honors.” Meanwhile, her family moved into their own apartment. “I remember it was totally empty, no beds even. We got some couches from a dumpster. But somehow, in time, my mom made our empty apartment feel like a home.”

After high school, Erika enrolled in Phoenix College. She earned scholarships and took honors classes. A year and a half later, though, SB1070 passed, and Erika’s scholarships and her honors credits were taken away. “I was crushed. I had worked so hard,” Erika explains.

Never stop dreaming. If you don’t have dreams, you don’t have anything. Don’t be afraid like I was. I stopped my life for six years. Now I found a job I love. I am passing this on to my kids.

Still, Erika did not give up. She took part-time classes and earned a degree in Physical Therapy, with the intention of becoming a Physical Therapist for underserved and underinsured Spanish-speaking patients. Erika graduated, but she was ineligible for PT licensing because of her legal status. “I was offered a job, but then couldn’t take it because of my status. That really hurt.”

After that, Erika explains, “I put my life on hold for six years.” She married and had two children. Her husband, also an immigrant, had dropped out of ASU his junior year when SB1070 took away his scholarships. The young couple worked hard to make ends meet and create a stable environment for their children. “We were struggling so much.” 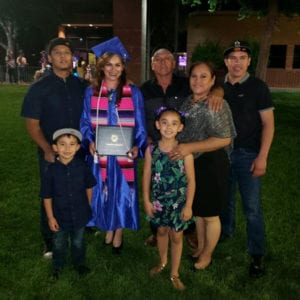 In 2013, Erika’s oldest child started Head Start, and Erika became an active classroom volunteer. At the encouragement of a Head Start teacher, Erika looked into earning a Childhood Development Associate’s (CDA) degree, which would allow her to work in daycares.

I ask my daughter every day: ‘Are you amazing? Are you beautiful? Are you brilliant? Yes. You have everything under your feet, and you can do anything.’ Now she says this back to me! Live & Learn taught this to me, and I’m passing it on.

Through researching CDA programs, Erika learned about Live and Learn. She was accepted as a client right away. Without Live and Learn’s help, Erika would not have had the financial resources to earn her CDA, or the emotional strength to carry on. As a client, Live and Learn helped Erika through a few emergencies that almost derailed her journey, including a robbery and a health issue. “Live and Learn is not going to solve my life for me, but they are helping me make my life possible,” Erika explains. Now, Erika is a lead teacher in an infant classroom, and she loves her job.

Erika’s father brought his family to the U.S. in hopes that his children would have a better life. Through his sacrifices and her hard work, Erika has achieved a better life for herself and her children.

Erika plans to earn a Bachelor’s degree in Child & Family Development. With Live and Learn’s help, she returned to Phoenix College in January 2018 and graduated May 2019. Erika hopes that this degree will enable her to advance her career. One day, she hopes to buy a house for her family.

When women thrive, they strengthen their families and the community. Thank you, The Bob & Renee Parsons Foundation, for investing in Live & Learn women!Empowering women to break the cycle of generational poverty is what Live and Learn AZ is all about. Career planning, education, training and mentoring provide a pathway to economic independence. #girlpower #women #womensupportingwomen #womenempowerment
…

Cheryl is working hard to turn her dreams into reality! This Live & Learn woman is following her entrepreneurial spirit towards a life of financial self-sufficiency. She is learning #beekeeping at @ABCMobileEducationCenter as she moves closer to her goal of one day selling honey from her own hive!#MotivationMonday #AZWomen #EmpowerWomen #HopeWithAPlan
…